Learning to Say the V-Word

Program covers for The Vagina Monologues with centerpiece image Peeling Back, donated by Judy Chicago

Meeting Eve Ensler changed my life. I’m not the first person to say this or the last, but grateful to be among the many who can. On this 20th anniversary of the Santa Fe premiere of The Vagina Monologues, I look back in wonder at the great gifts of being involved in bringing Eve and a stellar ensemble cast to our town for sold-out performances of ground breaking theatre.

October of 1999 was a difficult moment in my life. I had recently brought my graphic design firm out of hiding in my home to Santa Fe’s 2nd Street district, a busy, visible location. It was a big move for my little business, and I feared, as the Santa Fe self employed often do, that it might not work. And despite a confident professional face, I was aching inside over the cataclysmic end of what seemed at the time a significant relationship. I entered into the fall of the fin de siècle with great fear and loathing.

A friend wisely suggested that I try folding some service into my wobbly world. “Giving back might help heal the heartbreak,” she told me. I began researching local organizations with robust volunteer programs and landed on the Santa Fe Rape Crisis Center, now Solace. Then executive director Barbara Goldman welcomed me, and after completing training, I began working as a volunteer advocate for women and girls who had survived sexual violence.

Being present in the hospital or over the phone for those who have experienced sexual violence is heartbreaking work. I constantly wondered if I was listening with my whole heart and being respectfully supportive without invading their space. The monthly meetings for advocates at the Rape Crisis Center helped us hone our skills in aiding survivors and share tips for self care. I learned in time that my friend was right. Helping others can relieve our own wounds. I started to feel better.

At the November meeting the volunteer supervisor posed a question. “Would anyone be interested in helping organize our next fundraiser? It’s only two months away, so we need all hands on deck. We are bringing The Vagina Monologues to Santa Fe.” I was startled. I had always considered myself to be forward thinking, but I still reserved the word vagina for my gynecologist’s office. And I wasn’t alone. But once the supervisor rolled out the whole plan for the February fundraiser with playwright Eve Ensler and her mission to end violence against women and girls through an organization called V-Day, we were all on board.

Everyone eagerly took roles. My marketing company, BadDog Design, would play a major part, developing all the materials for the event—sponsorship packets, invitations to special events, advertising, and the theatre program. The SFRCC board, an active and connected bunch rallied. People who knew people who knew people started making phone calls. Willing sponsors began donating money to allay our expenses. Ali McGraw would join the cast. Marsha Mason and Joan Darling soon came on board to perform monologues. This production had a momentum all its own.

We booked the James A Little Theatre for February 19th. One performance. 400 seats. How would we convince that many Santa Feans to attend a controversial production that few had even heard of by a little known playwright? All the promotional materials would need to be alluring. A photo of Eve? A vagina? Could we do that?

Enter Judy Chicago. The renowned feminist artist, our southern neighbor in Belen, New Mexico, wanted to give us an image for the program cover. She wanted to offer Peeling Back, a provocative painting from her Through the Flower series—a colorful vagina emerging through vibrant rays of pinks and purples. Judy and I spoke on the phone about the logistics of getting the large format transparency to us. (These were the days before the digital transfer of content.) FedEx, overnight. “This is so kind of you! Thank you so much,” I sputtered gratitude on behalf of my team of creatives at BadDog Design. We had our centerpiece. We could build the design for the fundraiser around this voluptuous image.

In late January we began running ads using Judy Chicago’s image. I was nervous, wondering if this first splash of promotions would be enough to attract the audience we needed to make the event a success. The first ads in the The Reporter hit the stands early on a Wednesday morning. By that evening the show was sold out. Could we add a second show? After a flurry of calls to crew, cast and venue, we realized we could. And so, a Sunday matinee took shape. 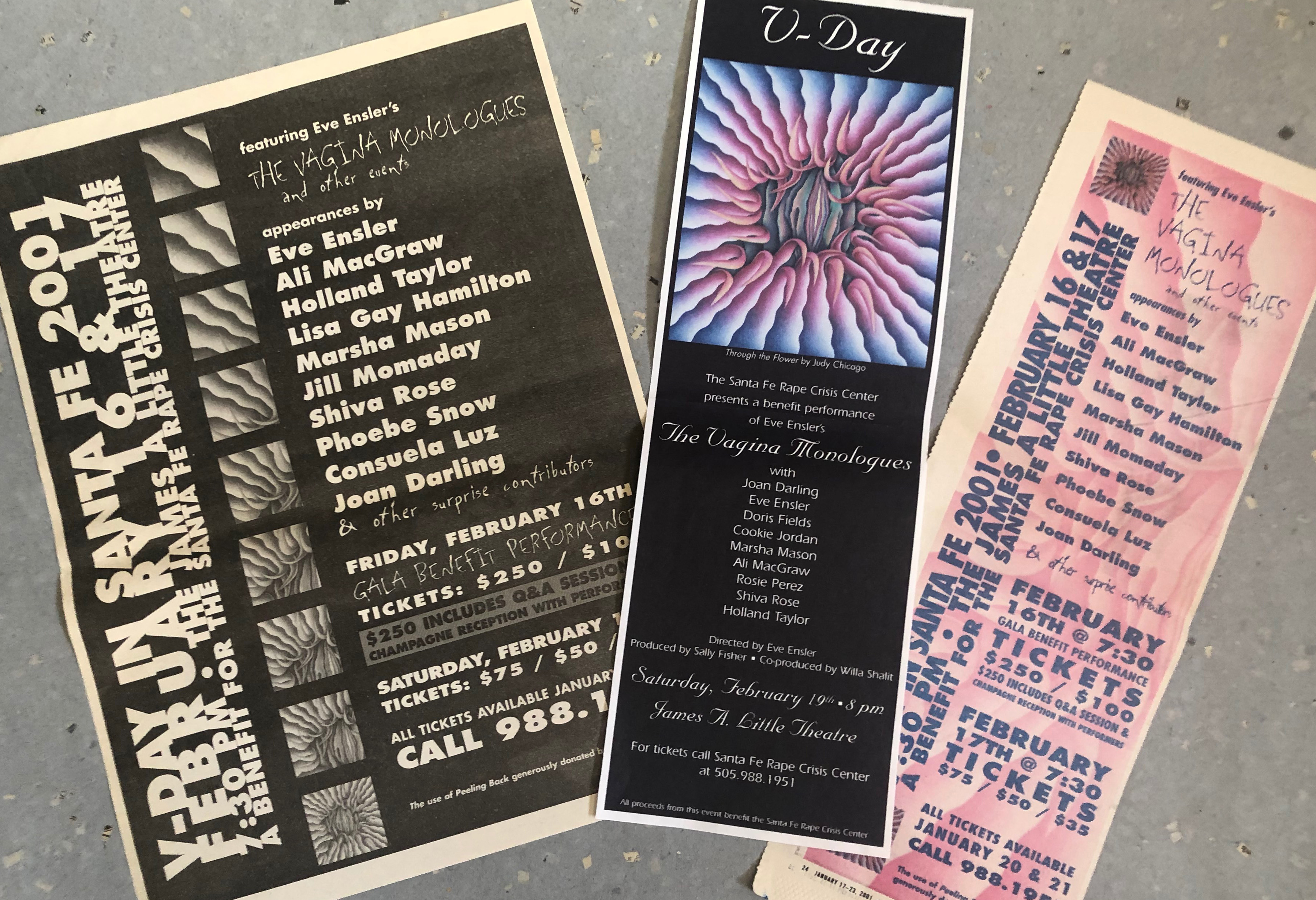 The next hurdle was finding housing for the out of towners. Local hotels offered free rooms, but some cast members were eager to stay with locals. At one of our final organizational meetings, the question I’d been waiting for was posed: “Would anyone like to put up the playwright?” My hand shot up. I wanted to meet Eve Ensler, and I had a spacious upstairs apartment in my home that offered privacy, comfort and a scenic east side view of Picacho Peak.

Eve arrived a day before the first performance to settle in at my digs. She immediately walked to the window to take in our little mountain. For a New Yorker this view was heaven sent. My guest loved the space, and felt she could really rest here. Afterall she was coming off of a week of V-Day events back east. For the days that followed I happily acted as host, chauffeur and eager answerer of loads of Eve’s questions about the people and culture of Santa Fe and my own story.

That night we dined at Andiamo—Barbara Goldman, Eve, producers Willa Shalit and Sally Fisher and cast members Rosie Perez, Holland Taylor and Joan Darling. Admittedly, I was a little star struck, but these were kind and gracious people without pretension. Soon Eve and Rosie were sharing stories that lasted long into the easy evening.

At the theatre on the day of the first performance, Eve arrived ready to pull the show together from all its disparate parts. At the one and only rehearsal, I remember standing at the back of the theatre watching Eve pointing, signaling and delighting in all. With the energy and grace of a concert conductor, Eve directed cast and crew, some of whom she’d met only moments before, weaving all the threads magically into what would be flawless performances.

Opening night was electric. Lines of people without tickets waited outside hoping for seats or a space to stand inside the theatre. The stage was fully dressed with a huge image of Judy Chicago’s Peeling Back presiding over all. No spoiler alert is needed to describe what so many now know is spectacular, riveting, breathtaking theatre. For me, indeed for everyone that night, each monologue touched us so deeply through hilarity and horror, transforming us from mere audience goers to a community joined by one shared experience after another.

For the denouement of The Vagina Monologues, Eve took the biggest risk. She asked for the house lights to brighten a little as she gently posed three questions: “Who here tonight knows someone who has survived sexual violence?” A few people stood, timidly. “Who here who has survived sexual violence yourself?” More people rose. Kept rising. “And who among you will commit to ending sexual violence in the world?” Most of the audience, women and men, were on their feet…and me too.

Meeting Eve left me empowered professionally and personally. The graphic design work that we created for the fundraiser met all of our marketing goals and was well received (despite a few fonts that didn’t stand the test of time). Shortly after Eve’s return to New York, she called me, asking if I might be interested in re-thinking the V-Day logo and then developing stationery for staff of this quickly growing non-profit organization. Suddenly we had our first national client.

Eve’s mission to end violence against women and girls was on the verge of exploding into an international movement. I had been fortunate enough to witness a tiny moment of that. I met a coterie of stunning woman—activists all—including Willa Shalit, Sally Fisher, Ali McGraw, and Cecile Lipworth, who would go on to work directly with Eve to take The Vagina Monologues and V-Day events worldwide. I deepened my commitment as an advocate to the survivors I was serving at the Santa Fe Rape Crisis Center. And I learned to say the v-word—loudly, in all its freeing resonance back to my own encounter with sexual violence.

Since V-Day 2000, Eve has changed infinite lives, steered a course toward other movements, and guided girls and women globally to recognize sexual violence in its myriad forms and find it in their hearts to speak out, raise awareness and in many cases face their abusers.

V-Day events occur all over the world around Valentine’s Day, and Eve’s current work with One Billion Rising is considered “the biggest annual mass action to end violence against women in history” according to Marianne Schnall.

Eve’s most recent contribution to shining a light on violence against woman comes in her deeply personal book The Apology. She writes with empathy and wisdom the words she never heard from her abuser, her own father.

Learn more about all of Eve’s work in the world below.