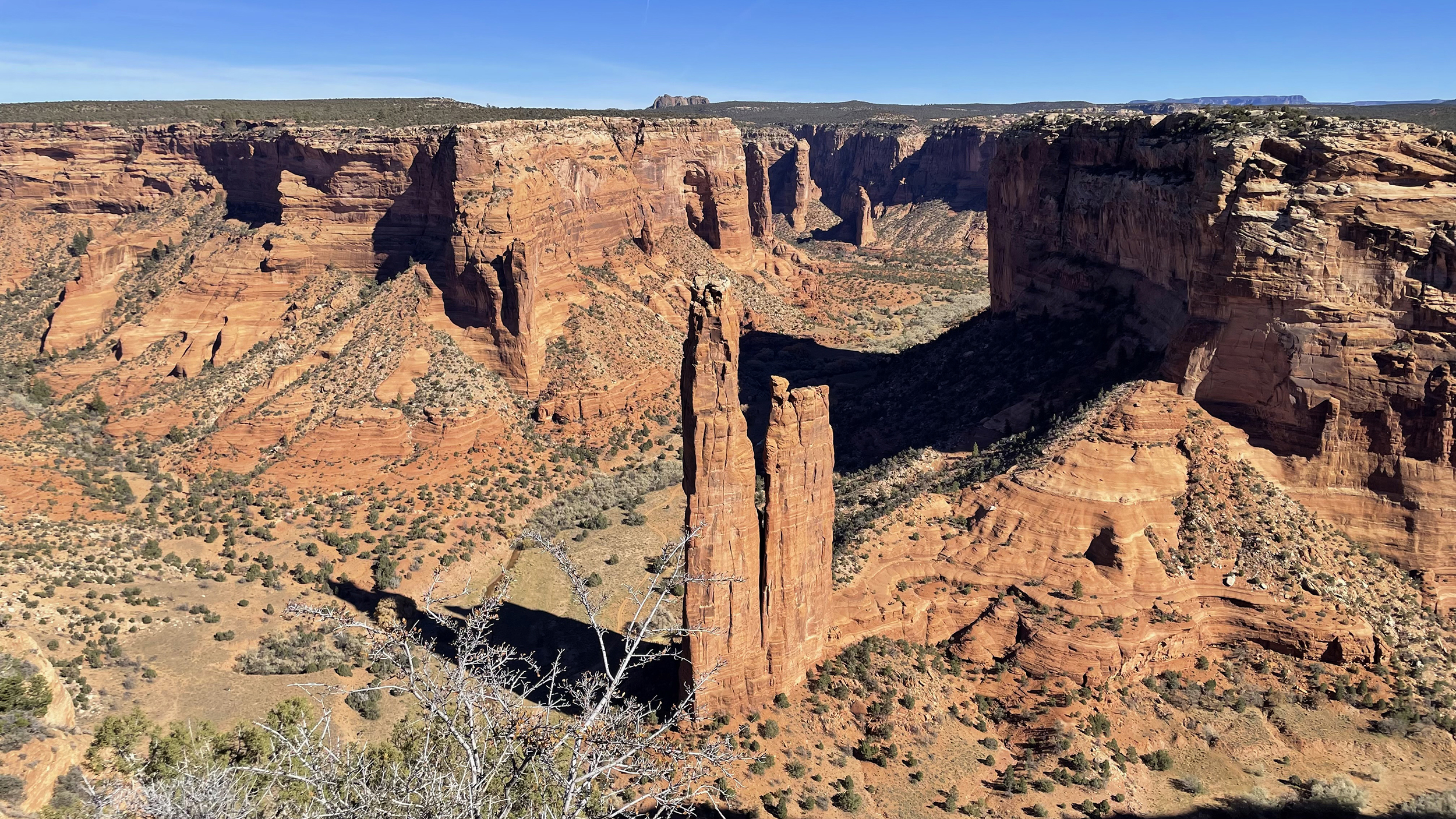 Spider Rock at Canyon de Chelly on the Navajo Nation.

Earlier this month my partner Stewart and I journeyed to Navajo Nation in our pickup truck, stocked with boxes of food, supplies and warm gloves, socks, and hats. Joined by the fabulous folks at Santa Fe non-profit IndigenousWays, we were able to deliver these goods personally to many elders and to kind emissaries who drove the rest of the boxes to those scattered across this sprawling reservation. 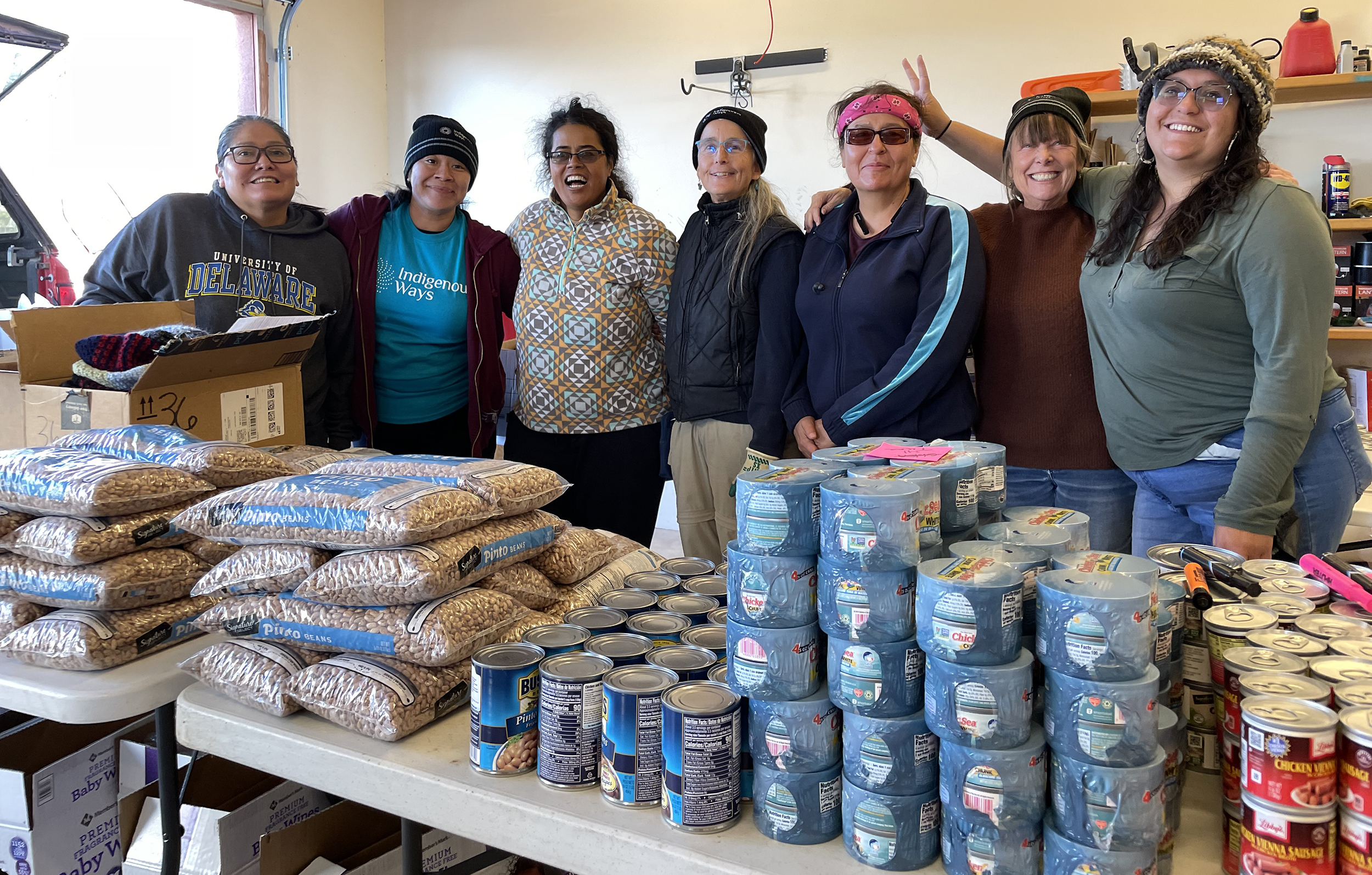 The packing crew from IndigenousWays

What a great gift it was to be at the giving end of such an exchange with so many lovely people. We shared lots of smiles, met elders in need, heard rich tales of life on the rez, enjoyed a traditional Navajo feast of mutton, fry bread, and my favorite—blue corn meal mush—and visited the wondrous sacred land formations in Canyon de Chelly. 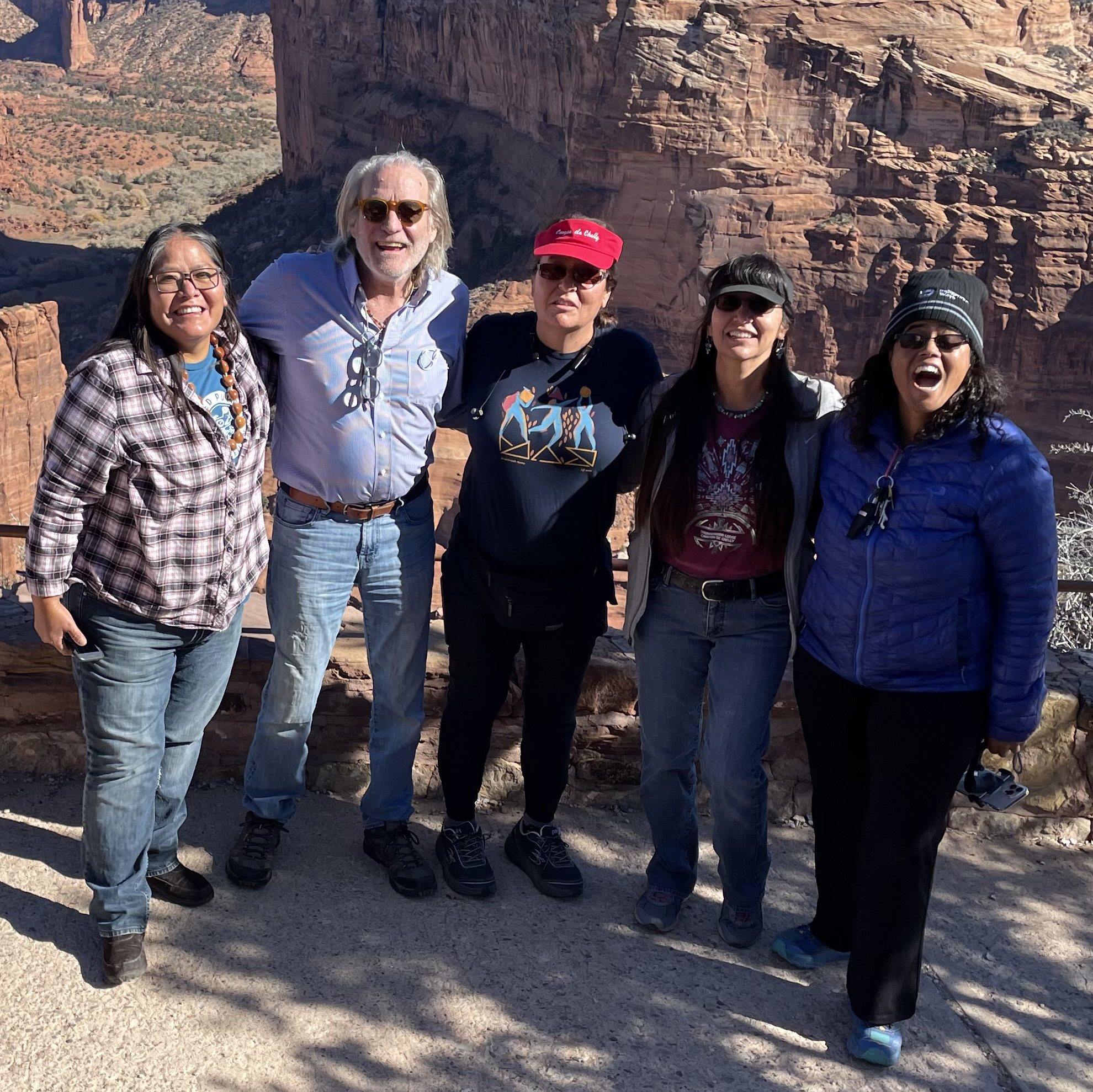 We traveled with the founders of IndigenousWays—a Santa Fe non-profit run by two native women, our translator Tash Terry (Diné) and Elena Higgins (Maori/Samoan). Also joining us were board members, Michelle Redmond (Diné) and Rachelle Pablo (Diné). They introduced us to elders in the Chinle, Arizona area and up to Black Mountain. 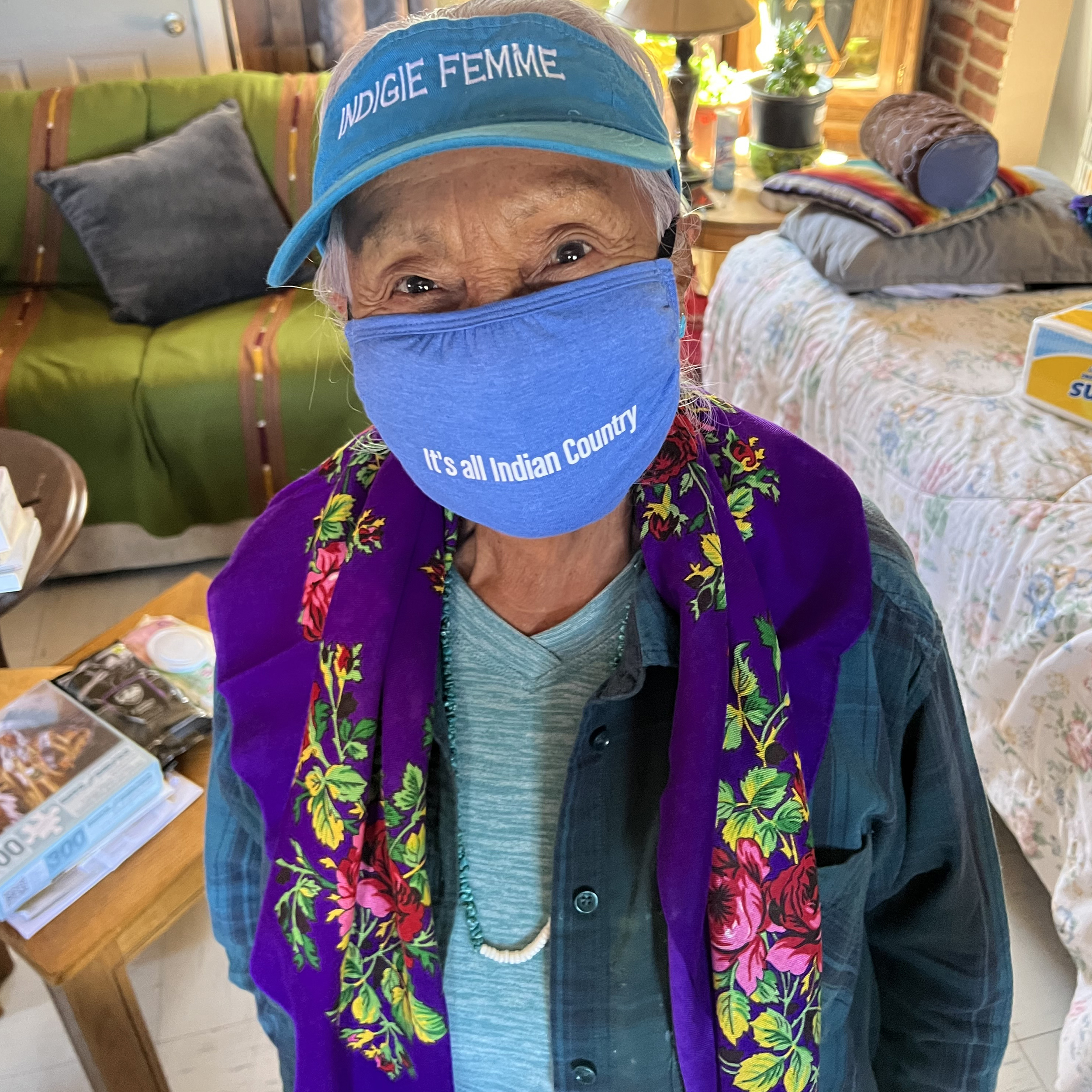 Everyone received their boxes of food and supplies with smiles. One popular item, Ben-gay ointment, elicited “ahhhhs” and prompted all to point to the particular ache that bothered them the most, a shoulder for one, a knee for another.

We experienced such rich stories from all the elders—stories of love and hardship and family and community. Without exception, the folks we met and our wonderful hosts continually referenced elders—parents, grandparents, friends, teachers—as powerful guides in their lives, supporting, helping, instructing. That was perhaps the most inspiring to me. Each elder was living proof that we are here because of “all our relations”—Ya at’eh shikwa’ asini in Navajo. 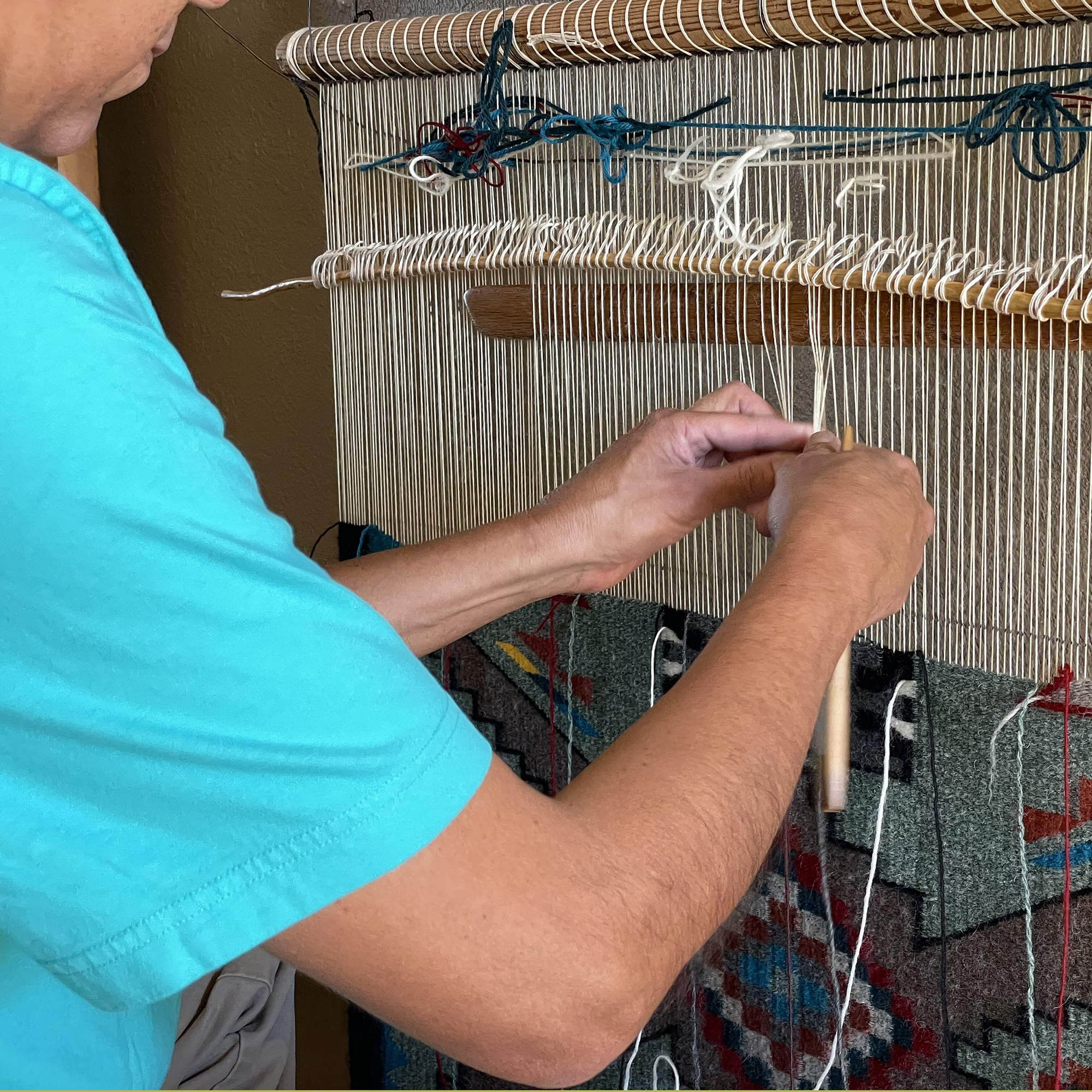 Weaver Dennis Long learned his craft from his mother. He weaves on a traditional upright loom and his many weavings sell around the country. Denis is deaf and went to the New Mexico School for the Deaf in Santa Fe throughout grade school. Tash Terry, our translator, learned to sign for her deaf elders when she was a girl on the rez. She signed and translated for all the deaf folks that we met while we were at Navajo Nation.

We also enjoyed special time with our hosts from IndigenousWays. Breakfasts at the cafeteria at Thunderbird Lodge were filled with hearty conversation. Often our lively talks turned to the many injustices that Native Americans have endured in the past and to this day. It is hard to lose sight of the historical details—promises made but rarely kept by the US government and coal companies.
We experienced one clear example of this in the lack of running water to many residents of Black Mountain. One elder, Arletta, has only recently received running water, but retrofitting the system the in her home atop a mesa has been an ordeal.

As we move through this Thanksgiving holiday, I think of our time at Navajo Nation as a reminder of what is truly important—giving and gratitude. 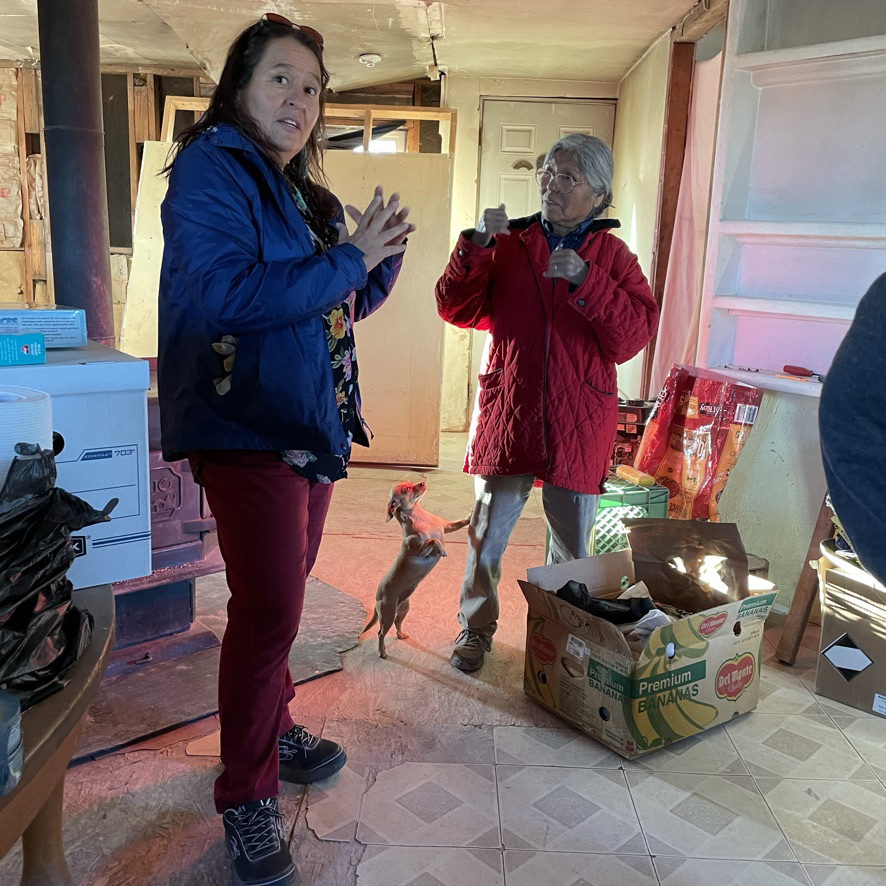 Arletta is the Navajo woman who taught our host Tash Terry (left) to sign at 11 years old. Tash has made a career as an interpreter of American Sign Language and also Navajo. Arletta’s precious Chihuahua knows that there are doggie treats in the boxes of goodies that we delivered. 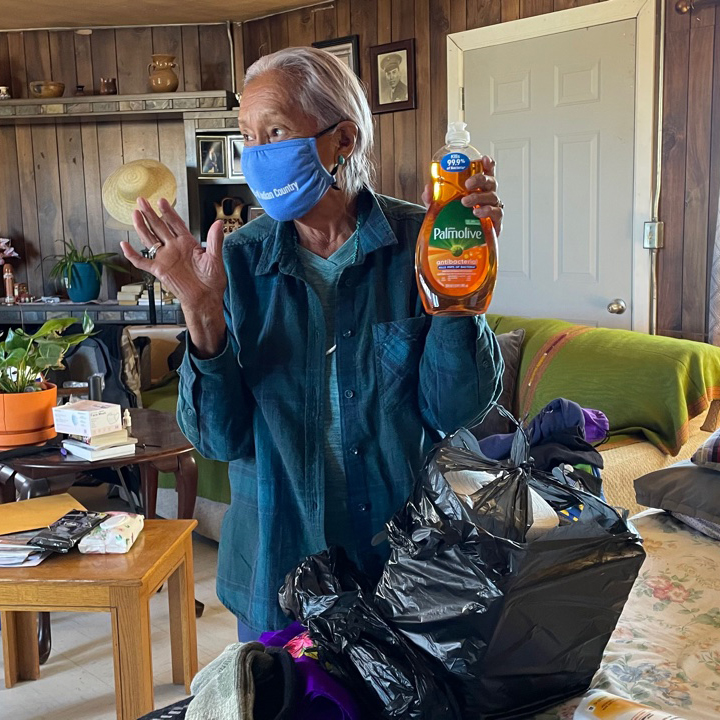 Jane Baloo, an 85 year old Navajo Elder, opening her packages of supplies. We received a list of items needed from Tash and Elena several weeks ago after Stewart first hatched this idea of delivering supplies to Navajo Nation. IndigenousWays offered guidance on how to make this idea a reality. 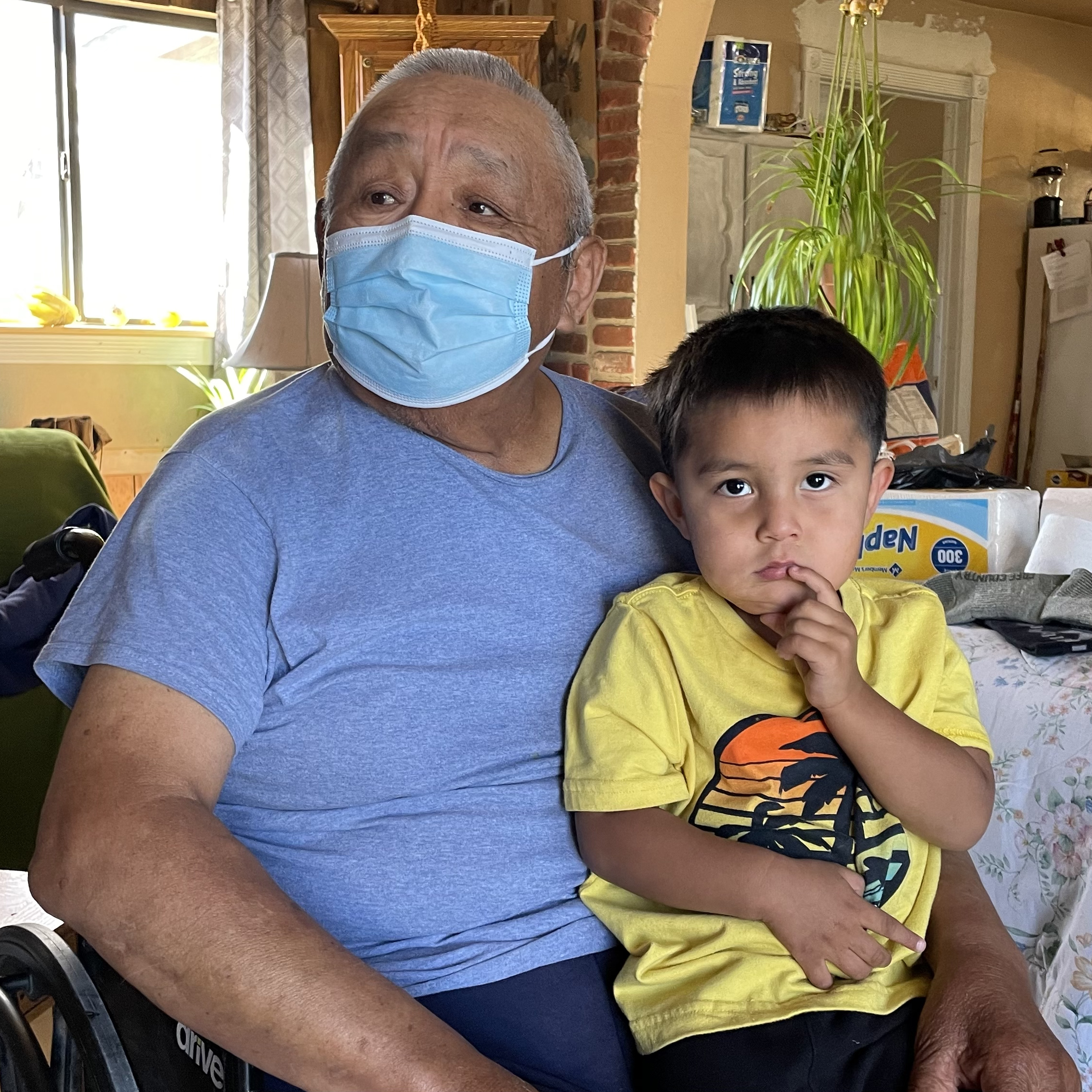 Freddy Baloo and his grandson. Freddy is a veteran and proud of it. The Dine revere their veterans, holding them in the highest regard for their service to the country. 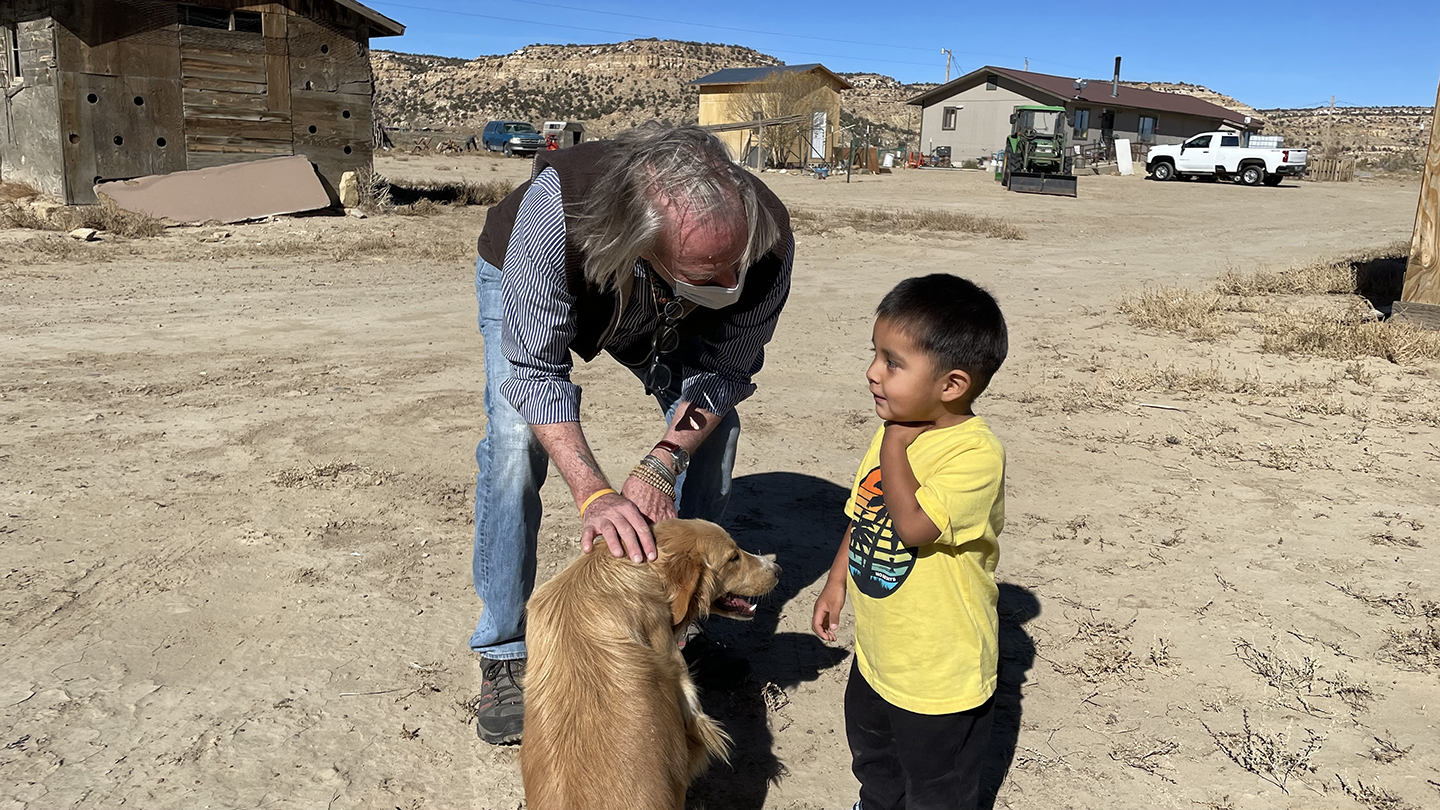 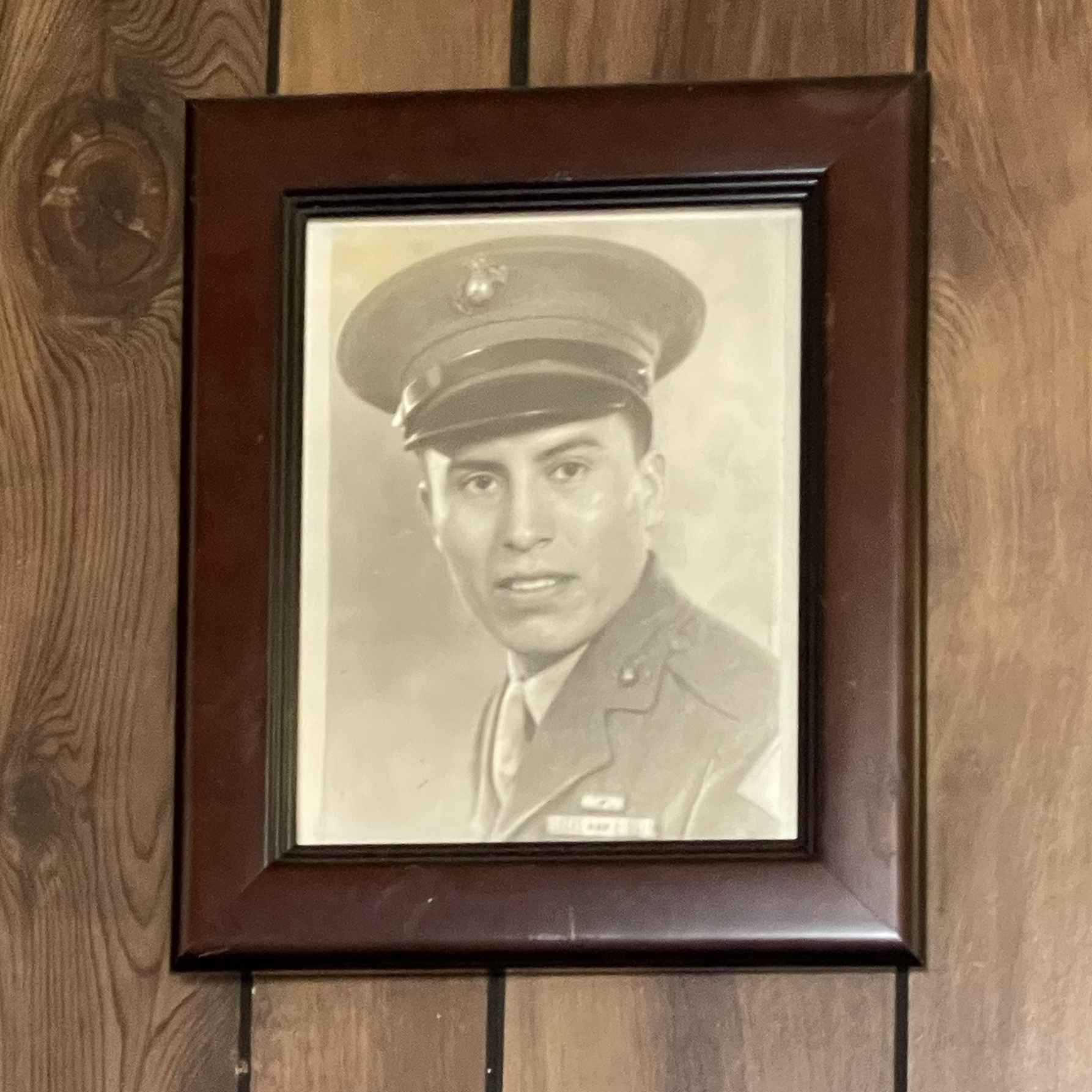 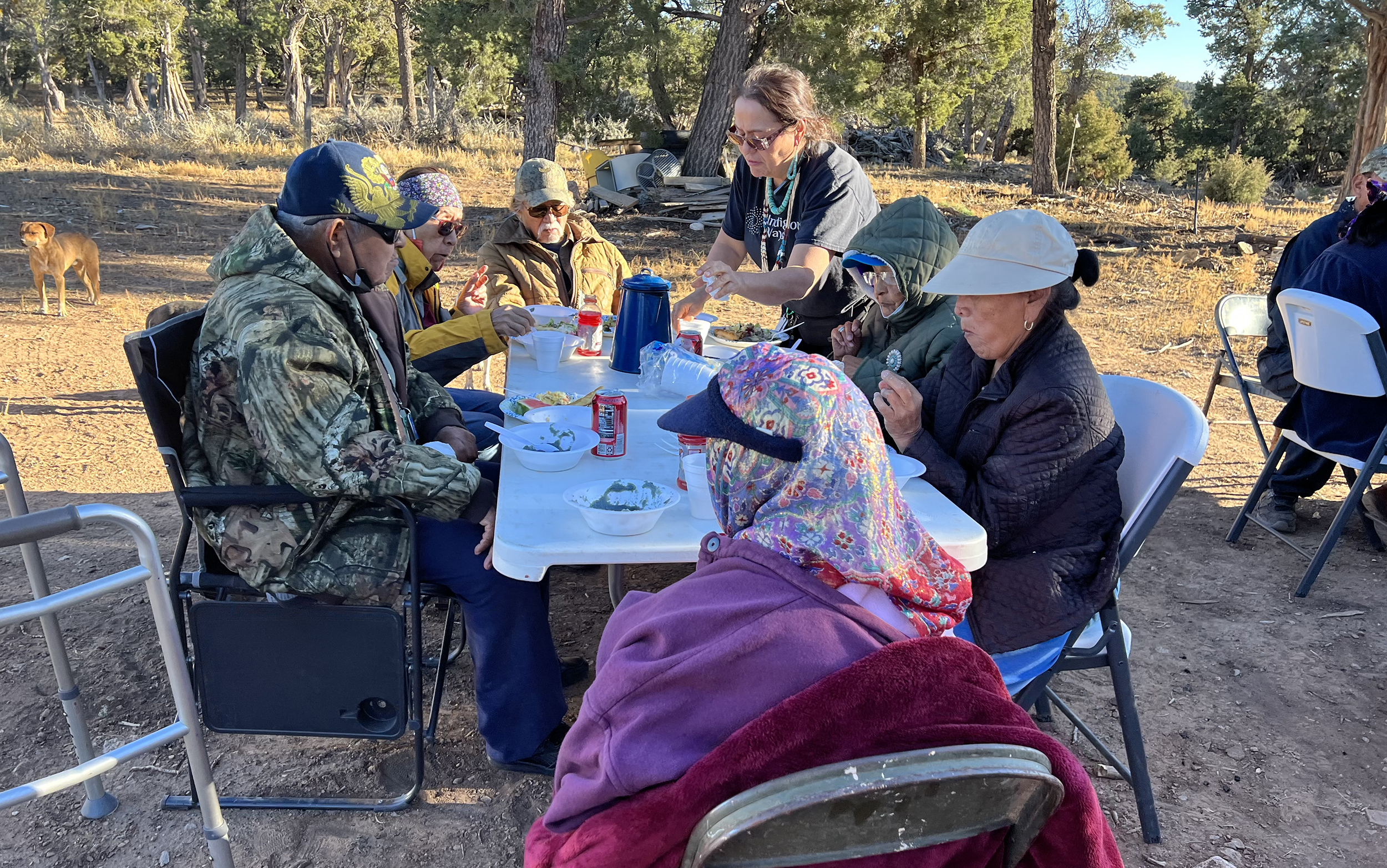 Feast with the elders on Black Mountain. 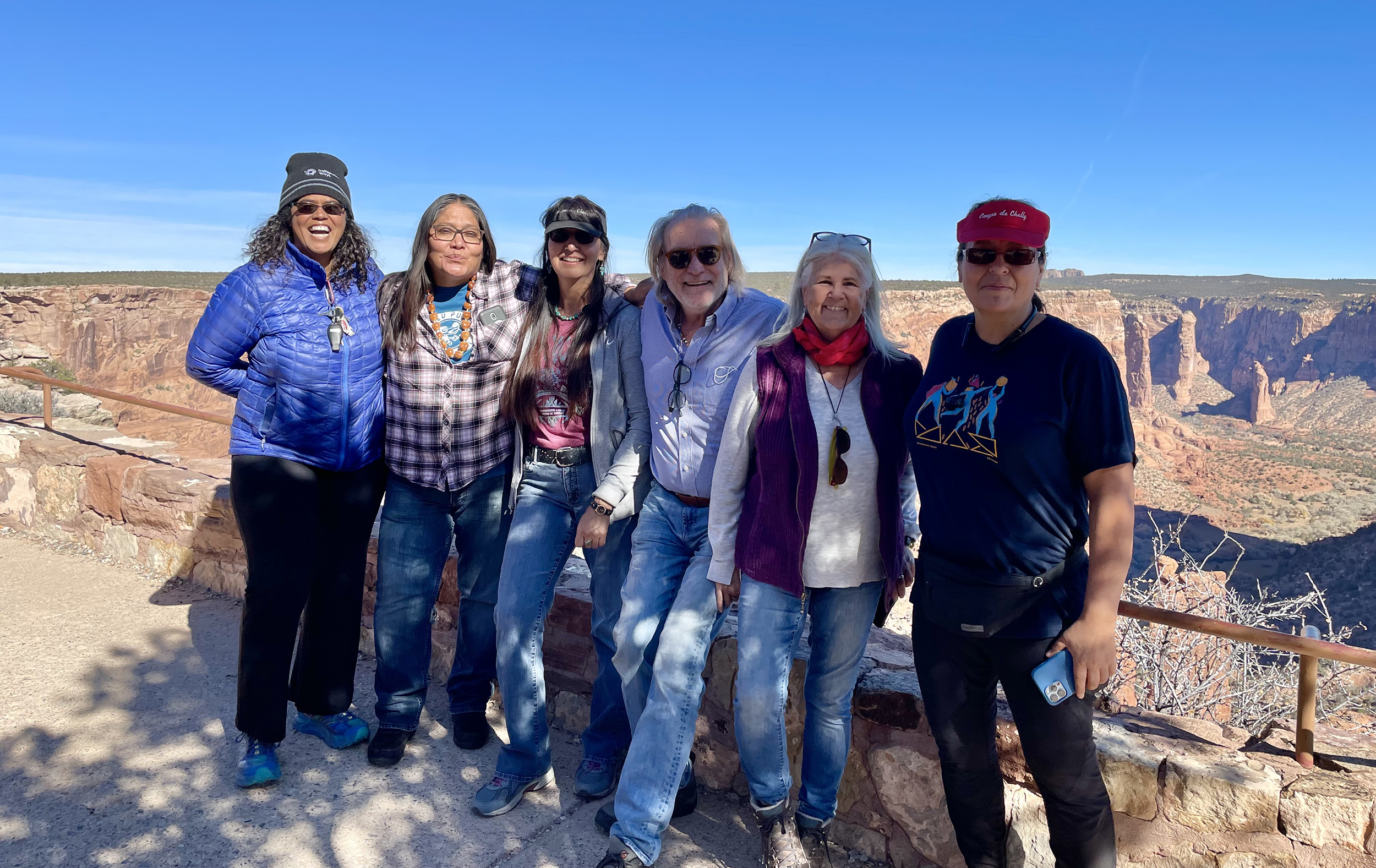 Our partners on the journey at Canyon de Chelly: Elena, Rachelle, Michelle, Stewart, Peggy and Tash.